After the Excitement, Back to the Grind

Well, in case you missed it, an anthology I am a part of came out last week. If you’re interested in all the gushing excitement, head on over to my personal blog here. It was a fun day/week for our little anthology, and its opening day was really amazing. So much excitement! So much checking of stats! So much fangirling when this happened: 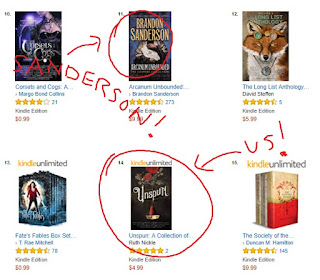 Okay, sure, his book has been in that general area forever, and we only hit it for a little while. But still, it’s one of those little moments you just have to enjoy.

Now a week has passed, and we’re past all the first hoorahs. And suddenly it’s like my writing is in a vacuum. I’ve been spending the last several months on almost weekly deadlines—short story contests, submissions, materials to submit for the upcoming Storymakers conference, final proofs for Unspun, etc. Now I have this gigantic lull.

I think this is where writing is hard for some of us. Somehow I manage to pull out some impressive feats once in a while when I’m backed up against a deadline, but then in the in-between spaces it can be hard to feel properly motivated. But these in-between spaces are where a lot of the real work happens.

So we have to find ways to motivate ourselves. It’s different for everyone, but we have to find what works for us. One thing I’ve got write now is an amazing accountability partner—we check in with each other every week on goals and plans. It doesn’t keep me perfectly in line, but it helps me to remember, “Hey, if I spend five hours binge-watching reality cooking shows, I’ve got to go tell LaChelle I was a total spaz. Maybe I’ll just write for five minutes... and then binge watch.” (At least I wrote first!) I’m also trying to practice building in deadlines (like most short story markets have deadlines, so I’m trying to write to some of them). I have friends who create their own reward systems—new shoes, new books, a bowl of ice cream, etc. There are lots of options out there!

So if you’re like me and you need some extra motivation to keep writing past the really exciting moments (first ideas, first drafts, publications, etc.), go find it, implement it. Not every moment of writing has to be filled with joy and inspiration, but I think we can find a lot more lasting fulfillment as we practice writing through the grind as well. 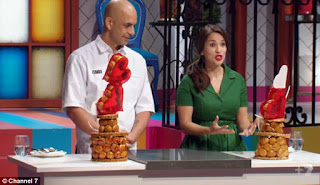 One of my guilty pleasures is watching reality cooking shows. Not that I ever cook much, but it's really fun to watch other people cook.

Recently while watching one on Netflix called Zumbo’s Just Desserts (seriously), I found myself thinking, “They’re talking about the lavender oil a lot. That means she added too much and it’s gonna taste awful.” And sure enough, a few minutes later, the judges were telling her that her cake tasted like potpourri.

I started paying more attention, and I realized that reality cooking shows are a really great place to see foreshadowing, clues, and misdirection in action. In any given episode, the filming and editing have already provided almost every clue you need to figure out the end result of the episode.*

These shows are also great at emotional manipulation. It was obvious pretty quickly in Zumbo’s, for example, that there was one particular character** who we were supposed to dislike. Everything this fellow said felt egotistical and just slightly sexist. And no one else spoke that way—at least not in the episode as it was edited. What is he like in real life? What are any of them like in real life? No idea. But we knew who to root for and who to dislike, just by their behaviors and speech. We didn’t have to be told.

Because of the editing, every clip they include matters, and they’re supposed to sway our perceptions. Does someone comment on how this weird flavor combination is definitely going to work? That will be important later in the episode—it’s either going to come back to bite them, or it’s going to turn out to have been absolutely brilliant.***

Which leads me to the subject of misdirection. Because it would be boring if every clue told you where to look. So they edit in specific comments and moments, but you don’t know if they’re going to lead to a flop or a fly. That lavender oil bit could have led to a fantastic success. What it couldn’t have led to? Nothing. Talking about it has signaled that something important is going on.

When a reality cooking show calls attention to a detail, that means it will matter. As an audience, we may not know if it will matter for good or for ill, but it matters. And that’s the way our writing should be as well. The details that we focus on should tell part of the story. The reader should be able to look back and say, “Oh, I see now why that mattered.”

It’s like Chekhov’s gun on the mantel. You can’t just put it there and then ignore it.

Analyzing the ways that reality cooking shows manipulate the audience and misdirect/guide us has been interesting to me, and I find myself actively trying to notice the clues as I watch. So if you need an excuse to watch your favorite cooking show, here you go.**** Call it research.

* In shows that record the whole season before the first episode has aired, you can sometimes see the clues for the finale right from the beginning.
** I say “character” because, let’s be honest, “reality” tv isn’t actually real. These are certainly characters or at least personas, not real people.
*** I just wrote “absolutely brilliant.” This means I’ve been watching The Great British Baking Show.
**** One caveat: American reality cooking shows do it far more than foreign. The Great British Baking Show feels a bit less manipulative of our emotions, although there are still plenty of clues to the results of each individual challenge.
Posted by Unknown 3 comments:

Anyone who lives near me and knows me well enough to drop in unexpectedly (or just drop in at all really) already knows this unsurprising fact: I am not much good at keeping the house clean. Insert the usual reasons here: small children, other priorities, and so on. This isn’t about making me feel better for having a messy house.

This is about making changes—to cleaning up, to writing, to whatever.

A friend of mine recommended this book called How to Manage Your Home Without Losing Your Mind (which, incidentally, is on sale at Amazon today only!), and I recently started reading it. Previous decluttering/cleaning-related books had fallen flat for me over and over. The ideas sounded awesome, but I was never very good with follow-through. (Plus, as has become a standing joke, I don’t like to talk to my socks, and my tax documents don’t really spark joy.)

This book is for the non-organized among us. In fact, the author, Dana White, starts off by saying that most of those other books are written by organized people, people who just logically work that way. White is not.

Well, honestly, I think this book is pretty great. It’s all kind of completely obvious—except that I’d never really thought these things through, and I’d never really bought into them before. So it’s obvious but also ... not obvious. And for the first time in a long time, my dishes are being finished every night (even if I have to handwash a couple!), my kitchen floor is clean(ish), and tidying doesn’t feel like it takes forever. I consider all of these things epic wins (even at the same time that I’m super embarrassed to admit that as a 37yo I still hadn’t figured out how to do these things regularly). So if you too have cleaning problems, go buy it! Read it! It’s an idea.

But this post isn’t actually about whether or not you’re a clean person. It’s about starting small. And how small makes a huge difference.

In How to Manage Your Home, the first task you’re assigned is just to do the dishes every day. For some of us, this seems like a daunting task. But White essentially says, “Pull up your big-kid panties and just do it.”

Novel concept, yes? Just do it.

And now we come around to writing! (See? I do get there eventually.)

How does a story get written? A few words at a time. A couple of sentences, then paragraphs, then pages. But how does it not get done? By staring at the blank screen (or even just thinking about the blank screen) and freaking out because there’s so much to do and you haven’t started and you’re on a deadline and your ideas are crap and everyone out there is a bestseller and your friend has a more popular social media account than you and maybe if you just post something brilliant (like a blog post about starting small?) suddenly everyone will love you and you’ll get contracts and agents and publishers and million-dollar advances, but wait, none of that is going to work because your screen is still blank and it’s freaking you out and...

Get the picture? So what should you do about that story that you haven’t figured out yet? That you really want to write but it’s scaring you because it’s so hard or you’re not sure where to go or you’re not sure you’re good enough to write it yet? (Welcome to my entire life right now, by the way.)

You can do it. (And now I have to go start working on that story I’ve been avoiding like the dickens. Sigh. Taking my own advice is overrated.)
Posted by Unknown 1 comment: