Today I’m very lucky to be interviewing Jaima Fixsen a Mormon, a mommy and the author of Fairchild - http://www.amazon.com/Fairchild-ebook/dp/B00B76PGOQ 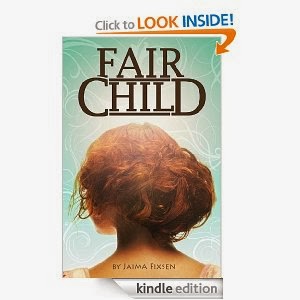 Hi Jaima, thank you for agreeing to this interview.

When and why did you start writing?

Like many of the readers and writers of this blog, I started writing after I had a couple of kids, just looking for a creative outlet. I'm not really good at sewing or jewelry making or decorating my house . . . I'd finish a project and compare my work to the picture and feel only frustration. Writing was different. No matter how awful my first drafts start, I read them and feel excited about what they might become, probably because I'm not comparing them to anything else.

I also like writing because it is something that feels more of my own, instead of following another person's pattern or instructions.

Which writers have influenced your writing the most?

Yikes. I don't know where to start. The first book I remember reading is Pierre Burton's The Secret World of Og. My parent's gave me this book for my 6th birthday and I devoured it the same day. I read it so many times my copy fell apart. I always wanted to be Pam, but I'm much more of a Penny. So that was when I fell in love with books. I love Jane Eyre, and Eva Ibbotson's fairy tale inspired romances, pretty much any kind of history, and slyly humorous non-fiction . . . mostly I just love to read. I make myself study my style guides, and I like to think that is having some effect, but some days I'm not so sure.

What is your favorite book and why?

Probably Jane Eyre, because it is a book that I've grown up with. In fifth grade I read it for the first time for a novel study, but stopped when Jane fled from Thornfield. It was too sad to go on. I made a diorama of Jane in the Red Room, but because my teacher could tell from my presentation that I hadn't finished the book, I got an F. I came back to Jane Eyre two years later and finished it that time. I remember wiping my eyes, sprawled out on the floor beside my old chest of drawers. When I read it in University, I remember being intrigued by the proto-Freudian imagery (I was taking some psychology courses at the time, obviously) and reading it again as a bravely feminist novel. I've never read that story without taking away something new, and the story is a romance that I never tire of.

Can you tell us about your main character in Fairchild?

Sophy is the illegitimate daughter of an aristocrat, born in the early 19th century. Her birth makes it hard for her to find her place, and she struggles to belong in society and in her father's family. Her longing to be accepted gets her in to trouble, of course. After a fall from her horse, she is rescued by a handsome stranger, who takes her for the legitimate daughter of the house. Sophy's brash but tender-hearted, and too clever for her own good.


How did you come up with the idea for Fairchild?

The idea sprouted from a series of oddities, the first being the tale of the Princess and the Pea. I've always thought it is a fairy tale that doesn't belong. There's no magic, no villain, just a girl in disguise and a mama's boy prince. I thought about these two people--unheroic, passive, even a little boring--and wondered what it's like for them, mingling with the rest of the fairytale crowd, standing next to plucky children who push witches into ovens, dragon slaying knights and the fairest in the land. The characters in the Princess and the Pea don't fit in that club any better than their story does. Immediately I imagined a bastard child--a girl who can't fit anywhere. Right away I knew she was my girl in disguise, pretending to be the impossible--legitimate, a person who belongs. An accident brings her to a handsome boy. What would happen, if she's so good at pretending he thinks she's real? A princess even? I put this story in the English Regency because it's a real time and place, but one where fairy tales belong. Balls, gowns, Mr. Darcy--all the good fairy tale elements are right at home here. I wanted this story to sparkle like Eva Ibbotson's romances, but for the characters to be as nuanced and ambiguous as they are in the original tale--there's a lot making this batch of misfits tick.

How do you balance your writing with motherhood?

Sometimes badly, but most of the time I manage. My family is very supportive. I set firm limits on when and how long I'm allowed to write, and give myself flexible targets for when I want projects completed. I remind myself often that imaginary  friends aren't as important as real ones.

What advice would you give to an aspiring Mormon Mommy Writer?

Allow yourself time. I'm much happier when I accept that writing takes time, sometimes longer than I expect.

How can readers discover more about you and you work?