A Houseful of Marshmallows 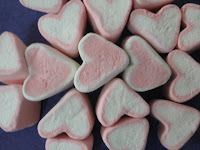 Recently the kiddos and I were discussing the story of the prodigal son.* In the midst of our discussion, I was looking for a way to help both them and me understand the feelings of the older son. If you need a refresher, the older son had stayed home and worked for his father while the younger son ran off, wasted his inheritance, and finally came back asking forgiveness. The older son felt angry about his father’s excitement over the prodigal son’s return.

Suddenly an idea came to me (inspiration! yay!). I ran to the kitchen and returned with six mini-marshmallows.

“How many of these marshmallows do you think you could eat?” I asked them.

They each assured me they could eat all six by themselves.

After we figured out all the variations for how many marshmallows they could each get, we discussed what would be a fair division of marshmallows. Not surprisingly, it came out to be three/three.

“Would it be fair of me to promise you each three but then give six to the 4yo?”

They were properly incensed.

But then here’s the catch. What if, instead of only six marshmallows, I had a whole houseful of marshmallows? Curious to find out how many marshmallows they each thought they could eat, I asked the 4yo if she thought she could eat a whole boxful. I thought this was a pretty optimistic estimate, since the box was rather large.

I should not have underestimated her stomach, as she informed me that she could happily eat their whole bedroomful of marshmallows.

I think that’s something that’s easy to forget. When someone else gets something awesome, that doesn’t mean that we can’t also have awesome things in our lives. I have friends that I admit I am a bit jealous of. They run successful businesses, have visible rewards in their chosen careers (including the career of motherhood), seem to just have everything together.

And sometimes, yes, people will have more blessings here on earth than we do. But God doesn’t just look at this tiny little lifespan. And he doesn’t have six measly little blessings to portion out to us. If someone gets a lot, that doesn’t mean we just the get the leftover scraps. God’s love—God’s blessings—are like a houseful of marshmallows. We can eventually receive every single marshmallow we want, every blessing we are prepared to receive—and so can everyone else. There is just no way to run out. What may feel unfair for a moment (even if the moment is this whole mortal life) is evened out by the wealth that God offers each of us.

And now I really want to go eat some s’mores.**

* Minor wordgeek moment here: “prodigal” does not mean “returning” or “lost.” It means “wasteful, extravagant, lavish”—from the same root as “prodigious,” which means “enormous, huge.” So he was hugely spendy. So, please, don’t say of someone you haven’t seen for a long time, “Here comes the prodigal!” Unless you really do mean that he/she was extremely wasteful. Then go for it.
** But not a houseful of them.
Posted by Unknown