Today is the day we officially celebrate the Declaration of Independence. A little-known fact is that the date is not when the document was written, or signed, or voted on, or presented to King George.  It's quite simply the date that was written on the draft that was approved by the Continental Congress, after all the edits they had debated over and agreed upon had been made. That doesn't make it any less important to celebrate any more than the history of why we use December 25 to celebrate Christ's birthday makes THAT celebration any less important.

Teensy bit more trivia: did you know that both Thomas Jefferson and John Adams died on July 4, 1826? James Monroe died on a 4th of July as well, and Calvin Coolidge was born on the Glorious Fourth. Just cool stuff. No bearing on anything, really.

The reason I was tooling around on the net to find these little tidbits, was because I was looking for someplace non-partisan to find a copy of the Declaration of Independence and the Constitution. I've been thinking for a long time that I need to study these documents more. I need to teach them to my children.

What does it mean to be a patriot? Does it mean that we wave the flag and jump to defend the honor of everything the United States does? Do we give a black eye to anyone who dares imply that the country may have done wrong in any epoch of its history (including modern day)? Are critics un-patriotic?

Well, in a word, no. None of those things are actual patriotism.

Patriotism, American Patriotism at least is a dedication to the ideals upon which our nation was founded. Some of those ideals are actually revolutionary to this day. The thought that we can completely and utterly disagree with our government, established by the Founding Fathers, and still call ourselves lovers of the country they created, seems absolutely revolutionary. But here it is, from the Declaration of Independence:


“Governments are instituted among Men, deriving their just powers from the consent of the governed, -- That whenever any Form of Government becomes destructive of these ends, it is the Right of the People to alter or to abolish it, and to institute new Government, laying its foundation on such principles and organizing its powers in such form, as to them shall seem most likely to effect their Safety and Happiness.” –Thomas Jefferson, the Declaration of Independence

So, the love of our country and our fellow citizen serves as the impetus for change. Our love for free-thinking, for individual freedom, means that we debate--hotly--our own positions and beliefs about what the government should be doing, controlling, overseeing, or not. To debate IS patriotic, if the purpose is to better the country and the status of its citizens.

But in order to intelligently debate, decide, vote, and act, we must know the principles to which we are dedicated. I learned all about the Constitution when I was in high school. At Brigham Young University, we had to take an American Heritage class--a combination of civics and history that was pretty intensive--it even had a LAB. But, it's been (REDACTED) years since then and most of what I've learned has faded from my mind. So, I am dedicating myself to getting reacquainted with the Constitution. I want to be able to contribute meaningfully to not just the national debate, but to affecting change in my community, my state, my country.

There are MANY sites that offer downloads or even books of the Constitution in different formats. There are online classes that can be taken. Like I said, I don't want to be partisan in this post, so I was looking for something without political leanings one way or the other in order to provide a resource for you if YOU would like to take a gander/refresher on our Constitution. I found the following website and read a lot of "we will not take sides" from different pages, as well as many different documents and offerings for educational opportunities. Here's the site: http://billofrightsinstitute.org/founding-documents/

No matter what side of any debate you're on, whatever your political leanings, there's no denying that our country is in trouble. It's being ruined by (insert politically opposite point-of-view-holder here) and it's up to each of us to halt its rapid decline.

Part of patriotism is being educated as to what ideals you are being loyal to. 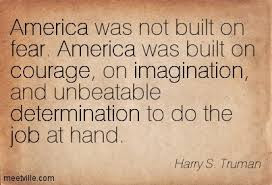 Let's show our patriotism by giving ourselves the tools to do the job at hand.

God Bless America.  (I really mean that, I'm not just being patriotic)

What does PATRIOTISM mean to you?
Posted by Leann