Okay, peoples. It's May 11th. AFTER Storymakers. BEFORE our deadline of May 31. And we want entries!!! We want this ebook to be filled with your fabulous writing--so send it in!!!

As part of this kick in the pants, I wanted to update you on the fabulous ebooks that are being offered as prizes, along with gift cards and the joy of seeing your work in digital print.

First is the amazing Marsha Ward! She donated a copy of her fabulous book, The Man From Shenandoah.
Here's her author's bio: 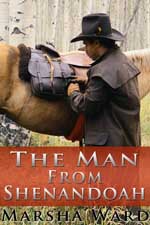 Marsha Ward was born in the sleepy little town of Phoenix, Arizona, and
grew up with chickens, citrus trees, and lots of room to roam. She began
telling stories at a very early age, regaling neighborhood chums with her
tales over homemade sugar cookies and milk. Her love of 19th Century Western
history was reinforced by visits to her cousins on their ranch and listening
to her father's stories of homesteading in Old Mexico and in the Tucson
area.
Over the years, Marsha became an award-winning poet, writer and editor,
with over 900 pieces of published work. She is the founder of American Night
Writers Association and a member of Western Writers of America, Women
Writing the West, and Rim Country Writers. She makes her home in a tiny
forest hamlet in Arizona. When she is not writing, she loves to spoil her
grandchildren, travel, give talks, meet readers, and sign books.

Also, our very own Cheri Chesley is offering her great book, Wild Queen as well. It will be available for purchase on Friday, May 13th, but here's a tantalizing glimpse of what you'll see inside:

Roweena is the crown princess of Norvallen, a tiny kingdom with only one thing of value—the Healers' Grove. The trees in this small section of forest are enchanted, giving a sap that can be mixed into potions or salves to heal almost any wound.

And it’s in high demand.

Lucien, the young king of neighboring Demarde, comes to Roweena’s father seeking an alliance, but comes away with a marriage contract for young Roweena’s hand. Furious and stubborn, this untamed beauty vows he will never conquer her. But the contract purposely gives her time to come to terms with her fate.

Before Lucien can return, Roweena’s home is attacked and her parents are murdered. The Healer’s Grove is also attacked—burned to the ground. With nothing more than her horse and the clothes on her back, Roweena goes to the only person she knows can help her. Lucien. But he can do nothing with no legal claim to Norvallen, so they marry.

Lucien and his army destroy the invaders and rescue what remains of Roweena’s people. He then makes Norvallen a part of his kingdom, but separate, ruled by a man Lucien trusts who answers only to him.

Roweena tries to carve a piece of life out for herself in Demarde, but her wild ways often clash with Lucien’s calm, reasoning manner. They have a son, Gregory, and then a daughter, Falina. When Roweena is pregnant for the third time, she vanishes. Speculation runs rampant. Was she kidnapped, fallen victim to a mysterious enemy? Or did she run away?

And last, but certainly not least, is the glorious Jenni James, offering her great new book, Eternity, cowritten by AJ Cole. Here's their info:

AJ Cole is from Nottingham, England; he is married with two young children and a stubborn Weimaraner dog. When he's not writing, toddler wrangling or dog wrestling, he enjoys practising martial arts, meditating and cooking south-east Asian cuisine.

Jenni James lives in Utah, is married to a totally hot red-headed Air Force recruiter and has seven children. When she’s not busy chasing them around the house (the hubby too!), she likes to paint, dance, cook and write.
Jenni and AJ are offering something else: They will give a copy of Eternity to everyone who even ENTERS the contest. Plus, if you're interested in doing a book club with their book, they have offered to SKYPE with your book club, and hear AJ all the way from England as they answer questions. Wouldn't that be awesome!!??!!

So there you have it, folks! An amazing basket of goodies...if only you'll try! We want to rejoice with you as we see your writing in print. And for the record...we're probably not nearly as tough as you think we are, 'cause we're just like you, writers struggling to get their books written and their voices heard. So LET'S HEAR YOU!!!
Posted by Unknown