Love of a Lifetime

Most people learn faith from experiences that they go through. At times, when you have no other choice, but to have faith or give up. I learned about faith and love from my grandparents. Their “love story” truly shaped who I have become.


It was a time that money was rough, and family mattered. My grandparents were ready to start their life together, but with Merle, my grandma, still in High School they would wait a little longer to marry. Life seemed perfect, until a letter came in the mail. Jerry, my grandpa, was being drafted in the Army for a year. It didn’t alter their plans too much only by a few months, but they were both scared of that year apart. Only one month after he left something changed everything. Pearl Harbor was bombed and WWII had begun.

Pictures and letters were the way they could communicate and my grandpa described it as “Gold to me”. The year passed and he was still far from family and the wedding was put off. He put in requests for a furlough to go home, but they were all denied. One year, turned to two and then three. It was the most difficult thing for them to go through.


My grandma saw friends get married and start their lives together. All she could do was wait. And she waited so faithfully.

Grandpa got word that they were moving out and were not told the destination. As they got closer they were explained the mission, Iwo Jima, Japan. The initial attack was several days and nights, but they remained on the island for months. Still throughout the years both were faithful and still in love.


Just before he was gone for four years he returned home to his family, friends and Merle. They couldn’t wait any longer, they were married seven days later on November 7, 1945. 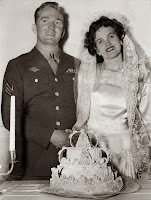 Throughout my life I heard the story over and over again. It helped me know that true love does exist and I can get through anything. September 23, 2012 Grandma passed away. It was so hard to see my Grandpa without her. After being apart those four years, they never wanted to be separated again. Among my Grandma’s scriptures there were some “Scripture Study” notes that she had typed up.


Thoughts: Trials and troubles are mandatory, misery is optional.”


It is so true. I feel that because of my grandparents’ examples I have been blessed to endure things and learn from them, rather than complain or suffer. Just this last Tuesday on November 5, 2013 Grandpa decided he was ready to join his wife. He passed away 72 years after he left his sweetheart to be part of the Army and two days shy of their 68th wedding anniversary. 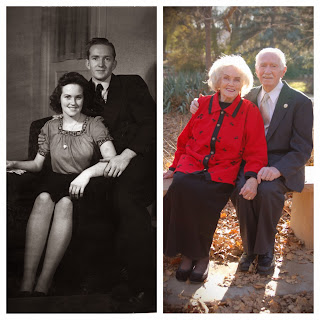 Picture on the left was taken in 1940 after they got engaged. The picture on the right I took of them November 2009 for their anniversary. My grandpa just told me a few weeks ago that this was his favorite picture of him and grandma. I was looking at it and realized that the pose is so similar to the one from 1940.
﻿
A week before he passed away Grandpa said he was going to die and he was scared. It was so hard, several family members were there to comfort him. I held his hand and told him how much I loved him. I told him that if he did leave us, he had Grandma waiting and he would be okay. I said if you don't we are all here for you and it will be okay. I didn't know how else to comfort him. This morning I was thinking of that moment and remembered a letter that he wrote Grandma while in the Army. He was scared. He was leaving on a ship to an unknown destination. He felt for sure that he was going to die and wouldn't make it back home. I am thankful both times Grandpa made it home to his sweetheart Merle.  I am thankful for both my grandparents' love and faith that got them through hard times.

Oh darling, if only you were by my side I could face anything, but without your sweet words of encouragement I feel kind of weak at times. It’s not that I’m afraid to face what I’m required to, but it’s just that without you there is a vacant place in my life. You have become such a necessary part of me, that to take you away from me is like taking away all that life means. But as long as I know that you are still back there loving me, makes this waiting much easier. So long beautiful, until next time, keep smiling. Remember sweet itto honey dear that I love you more every day.

I had the opportunity to write their obituary and was honored. As I wrote it I was reminded of their faith and love. I am so blessed to have two amazing people and wonderful examples in my life. I am thankful for an amazing Savior and Heavenly Father who are always there  when we need them.